I have a couple of projects from the summer that I wanted to post about. 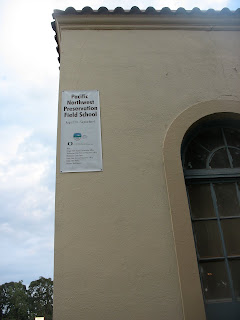 The first one being the Preservation Field School workshop at the State Fair. I was invited to be an instructor for this week long event which was held during the Oregon State Fair. Holding the event during fair time made for an interesting format. Thank goodness that the State Historic Preservation Officers were on hand to field questions from the general public. 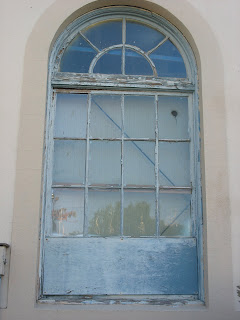 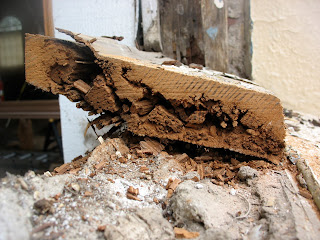 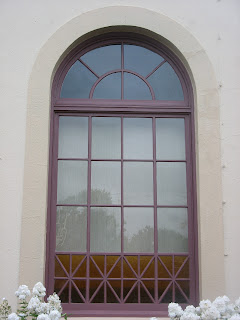 Window after restoration(2007).
The workshop was held at the Poultry Barn. This barn was built in 1921 out of hollow clay tiles covered in stucco. Each of the windows is comprised of an 8' tall fixed sash with a 4' tall arched transom that operates in the hopper style, interior swing. The bottom row of the fixed sash has a Union Jack design incorporating amber glazing. The amber glazing is original to the building and is not manufactured any more. It is thought that the amber shaded the poultry from the sun. 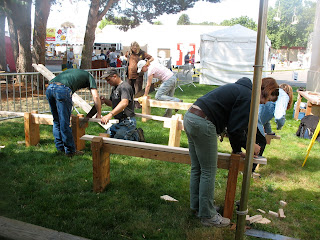 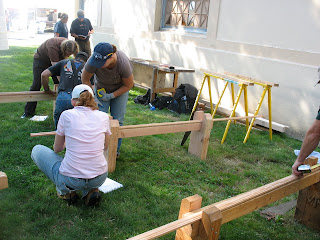 And more practicing.
I had six students which was about the right size for the space that we had. All windows on the West elevation have been restored so for the workshop we chose one of the worst windows on the South side of the building. This window has had extensive repair work done in the past. Due to insufficient funding and/or knowledge the repairs were not the best, it appeared that they used whatever materials they had around the shop. 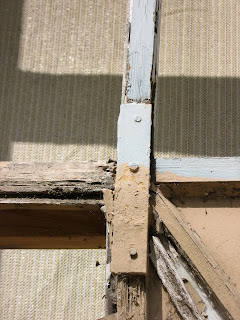 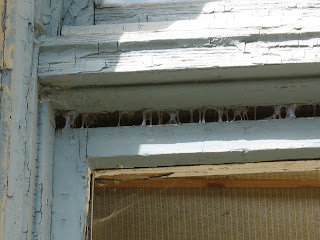 There was significant failure in the sill and bottom rail which resulted in the fixed sash dropping about 1 1/2". 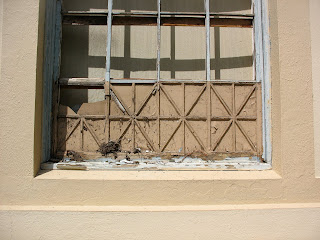 After removal of the plywood the extent of damage to the Union Jack design became clear. 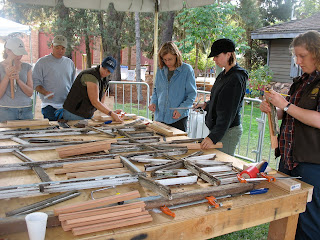 After the fixed sash was removed the puzzle began. Lots and lots of coping had to be done. Most of the Union Jack design ended up having to be rebuilt. I only had a week with these students and they had varying degrees of experience so most of the time we were trying to get a handle on the Union Jack area. By the end of the week most of the fixed sash had been repaired but that left the main frame and the transom to be fixed by me once the fair was over. 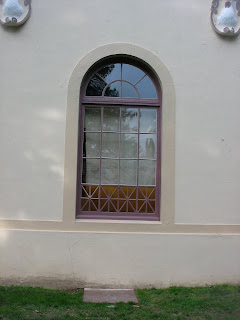 The window finally was completed at the end of October. 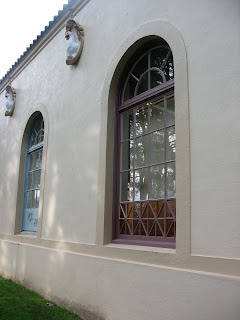 The stucco chicken heads go all the way around the building. They are one of the unique features of this building. Another feature is the missing fountain that operated in the center of the building. Unfortunately the fountain was removed and it has disappeared. We have not been able to find any photos of this feature. If anyone out there has any information about this fountain or other fountains in poultry barns please feel free to contact me. 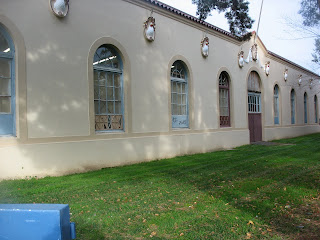 Lots of work yet to be done.
I want to thank Oregon SHPO and the Pacific Northwest Field School for inviting me to teach at this field school. I attended this school many years ago and it was nice to come full circle and teach the next generation of craftspeople.

Oculus in Print, Film and Radio